Many people own IRAs and or 401k accounts.  Many people mismanage their 401k and IRA. This is a sample of mismanaged issues, including improper selection of 401k and IRA investments:

This is just a partial list of mistakes IRA/401k owners make. I think that these owners believe their custodian, their employer or their accountant will inform them about these issues regarding IRA investments.  That is rarely the case in my experience.  The result - millions of dollars are lost to incorrect decisions and life-altering restrictions are encountered which could be avoided.

In this post, I address just one of the above issues. Let's take a look at IRA investment selection. 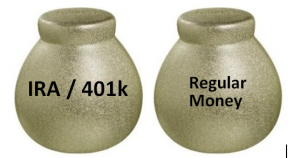 This post shows how selecting 401k and IRA investments in the right "pots" can save a small investor $100,000 in a lifetime. This savings accrues from taking advantage how IRS taxes different investments at different rates and for different holding periods.  Knowing these arbitrary tax rules will save you more than you may believe.

All funds or assets withdrawn from a traditional IRA/401k are taxed at ordinary income rates, up to 39.6% in 2016. Therefore, it makes little sense to place tax-saving investments (to be defined momentarily) in an IRA since they will lose their tax saving benefit upon withdrawal.

Most obviously, one would never place a tax-free bond in an IRA or any type of retirement plan (e.g. 401k, pension, profit sharing, etc.) because it will be taxed when removed.  The difference of income tax rates in this case, 0% for the municipal bond and as high as 39.6% for anything taken from an IRA, is huge.

As to annuities, annuity agents and annuity issuers will argue that annuities make sensible IRA investments for reasons other than their tax deferral (such as lifetime guaranteed income and death benefits and guaranteed income riders in the case of variable annuities). That may be the case, however, this author recommends that if you have two pots of money, one that is tax sheltered such as an IRA and one pot that is not sheltered, buy the annuity in the non-sheltered pot.  There are better ways to invest tax-sheltered retirement funds than to buy an IRA annuity.

A more subtle but no less important choice, is which stocks or mutual funds to select as IRA investments.

Knowing how income tax rates apply to stock holding periods determine which stocks to own as IRA investments. If you have stocks that you will hold for many years, then it is very foolish to own these in an IRA.

Stocks held for many years, when sold, will qualify for long-term capital gains rates, the lowest of income tax rates (15% for most people, 20% for those in the highest tax brackets, 0% for many retirees).

Let's assume you buy $50,000 of stock that you hold for 30 years. During that period, the stock appreciates 5% annually and pays a 3% annual dividend. You sell at the end of 30 years. Based on the stock sale, the difference in tax is as follows when held inside vs outside an IRA:

(To keep the analysis simple, I have assumed that the dividends were not reinvested and earned 0% and have also not given credit for earnings that would have been earned on the annual taxes not paid if the stock were held in the IRA.  However, even if these factors were incorporated, they would have a small impact in favor of the IRA. The calculation spreadsheet is here).

So we see that on a modest amount of stock, just $50,000 worth, over 30 years, one pays three times as much tax by making the incorrect decision to hold long-hold stocks as IRA investments.

Alternatively, if you have investments in volatile stocks such as technology stocks or pink-sheet stocks that you plan to trade frequently (i.e. hold for less than 1 year), these are best held as IRA investments.  If you trade these stocks outside of an IRA, your profits will be short-term i.e. less than one-year holding period and therefore, you will pay the high ordinary income tax rate on profit (up to 39.6%). You will do no worse if you do this trading inside an IRA because the eventual income tax rate will be the same.

But here's the good part.  When you do this high frequency trading inside an IRA, it is all tax-deferred until you are age 70 1/2 whereas such trading outside of an IRA would cause you to pay additional tax every year. The avoidance of the annual tax and the compounding that will accrue within the IRA will bring you significantly ahead.

Let's build on the same concept from the last section.

IRA investments bought and sold within a year are short-term and profits taxed up to 39.6%. Whereas those held more than a year quite possibly have 0% tax for many retirees.  Here's how the idea applies to mutual funds.

It is critical to understand the nature of the mutual funds you buy or own as different funds are taxed at different income tax rates.  Index funds, such as an S&P 500 index fund, does very little trading.  The average stock within an index fund is held for four years.  Therefore, when it is sold, the gain qualifies as a long-term capital gain taxed at a preferential rate  (15% for most people, 20% for those in the highest tax brackets, 0% for many retirees).

Additionally, the average stock in an S&P 500 index fund also pays a respectable dividend.  These dividends also meet the standards for "qualifying dividends" and are also taxed at the same preferential tax rates.  Therefore,  you would be terribly foolish if you understand income tax rates to select an index fund as an IRA investment.  To do so would be taking income preferably taxed at 15% and eventually exposing it to tax that could be as high as 39.6%.

The mutual funds that should be held inside an IRA are growth, technology and appreciation funds which commonly have turnover rates in excess of 100% annually (i.e. short-term gains). Doing so will avoid a nasty and expensive annual 1099.

As you see, a basic understanding of income tax rates and how they apply to different investments and holding periods is critical to reducing how much IRS gets from you over a lifetime. Shockingly, the difference in taxes could easily be over $100,000 for someone with just $100,000 of IRA investments.

You Pay More Taxes Than Necessary

And we guarantee your CPA has never told you The problem with paying taxes is that most people overpay. So if you are concerned about having enough in retirement, you must stop overpaying taxes. I know you think your CPA takes care of this for you. WRONG. I AM a CPA (retired) and I can tell you that 90% of CPAs do nothing more than enter your information into the little boxes on the tax return but NEVER tell you how to pay less next year. Why? Many of them simply do not know what we can show you. In ten minutes.
Get Your Copy Now - 6 Ways to Cut Retirement Taxes