The New Economy - Do You get It?

The new economy is here and I want you to stop looking for a job.

They don't ring a bell when something important in society has changed.

And something that changed at the turn of the century was the model for earning money. Yet some people are unaware of the new model, the new economy, and continue to use the old model, i.e. looking for a job as a way to earn a living. The job you seek either does not exist or does not exist in sufficient numbers so please stop looking for it. Or, you will encounter age discrimination.

In 2012, I heard Jack Welch, the ex-chairman of General Electric speak on CNBC. He commented about his involvement with a company whose business was so hurt by the great recession, the shareholders did not expect it to match its pre-recession revenues until 2014.

However, those revenues in 2014 would be met with 14,000 employees rather than the 23,000 required at the time the recession hit. The point—looking for a job is a job that has likely has disappeared.

Take a look. Here is the percentage of the population age 16 or over that has a job: 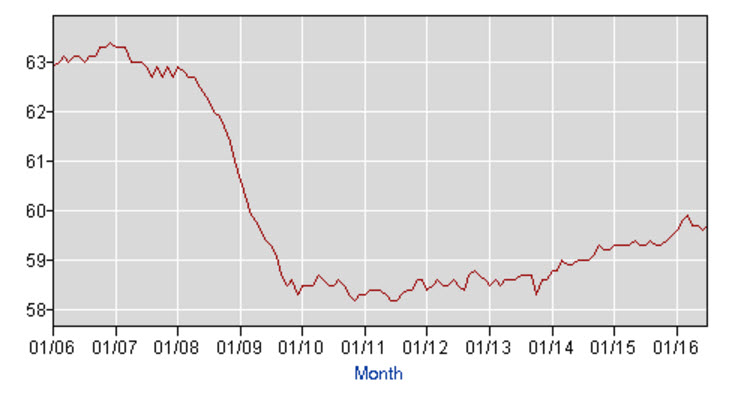 US Bureau of Labor Statistics

You must understand the big picture accurately if you want to support yourself and your family.

Economics as you know it has gone away.

For a short period of time, about 100 years, economic growth in America and wealth creation was so brisk, we had jobs for everyone.

Before 1900, and again now, there are no jobs available to you. You need to do what people did before 1900—make your own living. People had a farm or had a profession or had a skill. And they were almost all self-employed. To have someone offer a job was foreign thinking as it needs to be for you now.

Sure, there are jobs available but unless you have the skills in specific professions (currently accounting and engineering), tough luck.

And it's not a matter of waiting it out until the economy gets better.

Smart US companies don't want to hire Americans who demand high salaries or belong to unions. It is much wiser to hire someone in India or China and pay less and have less headache. Alternatively, if the business is in the manufacturing sector and chooses to build domestically, they get robots to do as much work as possible. A few computer programmers are hired to program the robots rather than machinists to do the work.

Please get it loud and clear—there are no jobs and there won't be any (unless you have specific expertise in demand).

This is true for the kids coming out of college, the folks over 50 who lost their job in the recession and the unskilled looking for work as drivers, warehouse workers, or clerks.

“I feel hopeless, and that just makes it hard,” said Sherry Lockhart, 53, of Enumclaw, Wash., who was laid off by the state's liquor control board in 2012, when voters privatized liquor sales. Now, her jobless benefits are about to be slashed as a result of federal spending cuts. “I just feel I've done my best over the years, and I feel like I haven't failed the system. The system has failed me, and millions more.” NY Times, June 8, 2013

It's not the government's job to fix this nor can they fix this. No matter what the candidates for president say, they cannot create jobs without massive borrowing.  And the US is pretty much borrowed all it should.

The same problem exists in China. That government which is not bogged down with democratic process is also unable to create jobs for its college graduates.

Now that the problem is clear and no one is coming to fix it, what is the new model you need to understand? It is this:

Identify what people (or business) want and need and will pay for, and deliver it

Let's start with a simple idea.

Every business I know wants more sales. While they won't hire you and give you a salary to get those sales, most will be delighted to pay you commission for sales you generate. So the business is willing to pay for the value you create. But they won't pay you hopingthat you will create value.

In the old days, a job was like getting heat before you put the wood in the fireplace. Now you need to put the wood in first to get paid. In this example, you would need sales skills. There are programs that teach sales skills. So one way to make money is to develop sales skills and you will never be at a loss to earn a living.

You get the idea. Identify what is desired and provide it and then get paid. It's a simple model that existed in every part of the globe until there was sufficient demand for labor to create jobs (the industrial age). That anomaly has now disappeared and it's time to make your own living. What's old is new again.