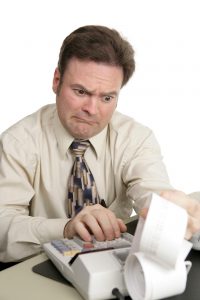 This group comprises the major ingredient in the recipe for retirement disaster. They are totally reliant on a Social Security Trust Fund that gets smaller every day.

It’s important to keep this in mind when looking at average retirement savings by age of American workers. This group of people with no savings weighs heavily on the statistics. When included in averages, this group helps paint an unrealistically negative picture of retirement savings by age in America. When possible, I attempt to separate this group and provide data for those people who do contribute to the national economy.

However, even when this group of non-savers is removed, the average retirement savings by age of a typical worker is not rosy.

When possible, it is better to use median rather than average as “average” savings is distorted by the haves, the wealthy families. Median, you will recall, is the number in the middle—half of the people have saved more and half have saved less. Alternatively, average sums all the amounts saved and divides by the number of people. So you can see how a few billionaires can distort the data.

Note that the data gathered and displayed in this post differs depending on which statistical source is consulted.  But they all show the same general trend which you can use as a scorecard for your own savings efforts.

The data is based on surveys done or models constructed by government and economic institutions and may not be representative.  And these surveys make some strange assumptions.  For example, some measure retirement savings as money in defined benefit and defined contribution plans (e.g. various 401 plans), and IRAs. But if you have $100,000 in a bank account, that is not counted as “retirement savings.” This author finds that rigid classification distorting and where possible, I show you figures on average net worth (i.e. wealth) by age.

For example, some measure average retirement savings as money in defined benefit and defined contribution plans (e.g. various 401 plans), and IRAs. But if you have personal savings of $100,000 in a bank account, that is not counted as “retirement savings.” This author finds that rigid classification distorting and where possible, I show you figures on average net worth (i.e. wealth) by age.

Also, consider that an individual with a specified amount of savings is actually richer if part of a couple.   A single person or couple pay only one rent, one utility bill, etc.  These surveys cited below do not consider this issue.

While the decline from 2010 to 2013 may be due to the great recession, this group has little time to recover before retirement. And when we say “net worth” we mean everything the family owns minus debts. In the table below, you can see the net worth for all age groups.  As expected, the amount varies upwards with age.

Interestingly, families get “richer” after retirement. Many people hold a notion that retirees use up their capital, but so far, that is not so.

Net Worth by Age (thousands of dollars)

The table above shows household wealth (I use wealth and net worth interchangeably).  Other sources report data per individual.

I focus first on net worth because almost any asset can be a retirement asset and qualifies as a measurement of average retirement savings by age. For example, one can sell their home and move into an apartment and convert home equity to their retirement fund. However, the amount earmarked as retirement savings for this group is a median of $10,000-$20,000. 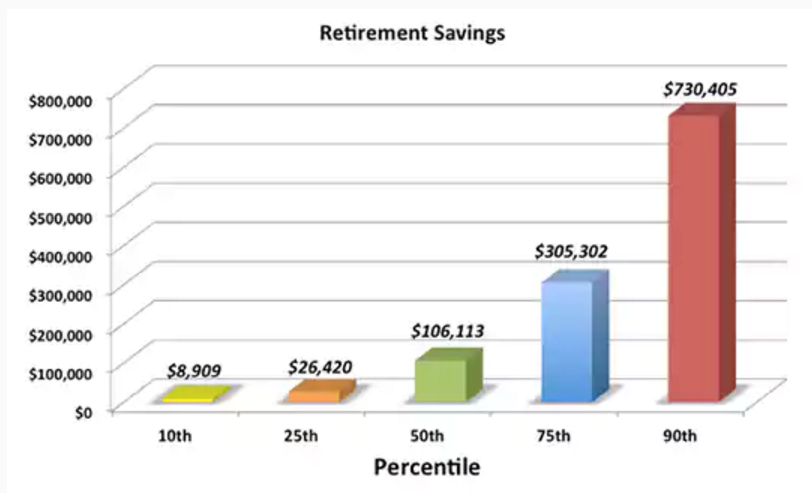 When we look at everyone en masse, you can see from the chart below that people have saved almost nothing, regardless of age. 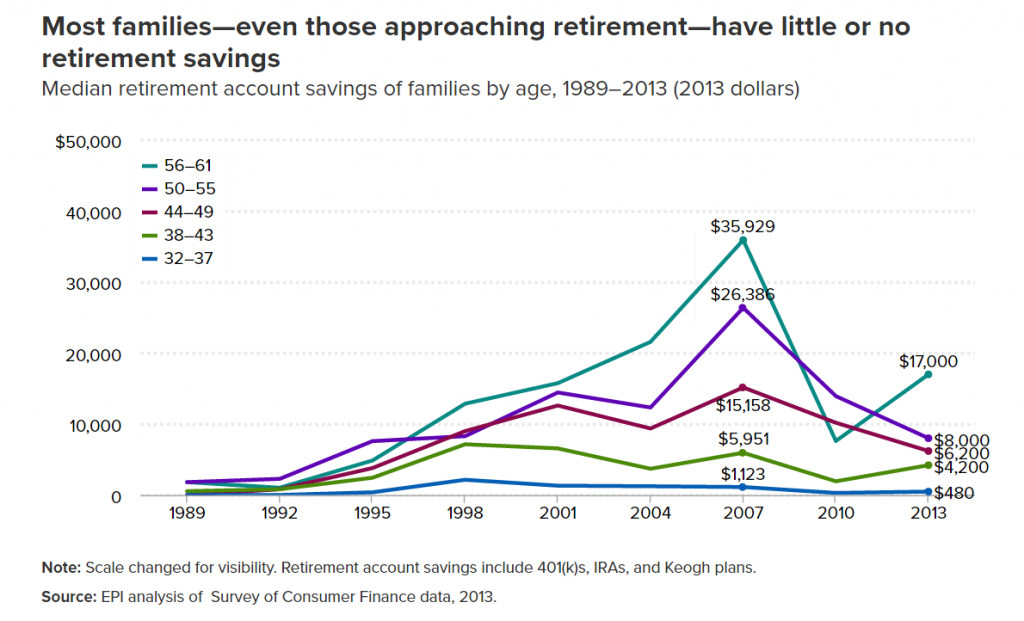 But it does not make sense to include the people who report they indeed have saved nothing -- about half of Americans. Here is the same chart, a breakdown of average retirement savings by age, but we exclude those with no savings. Note that for some odd reason, the EPI uses median in the above chart (the best measure) and mean in the chart below. Using the mean makes the data appear better than reality. 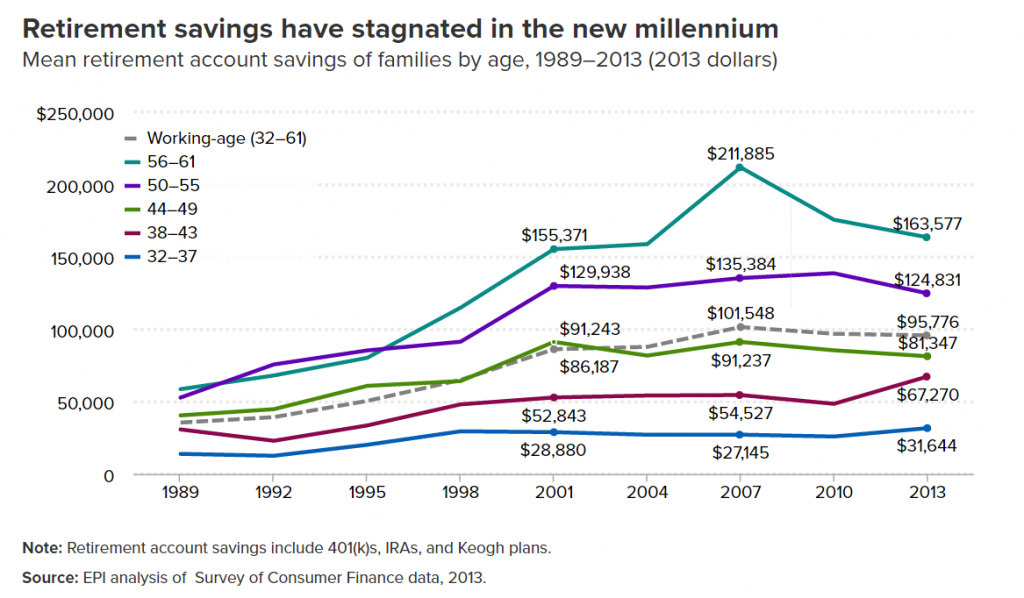 And the chart below shows us everyone with the difference between mean (distorted by the by the wealthy) and median (a better measure).

You can see that the mean retirement account balance for all families is $95,776 but the median is a significantly smaller $11,228. 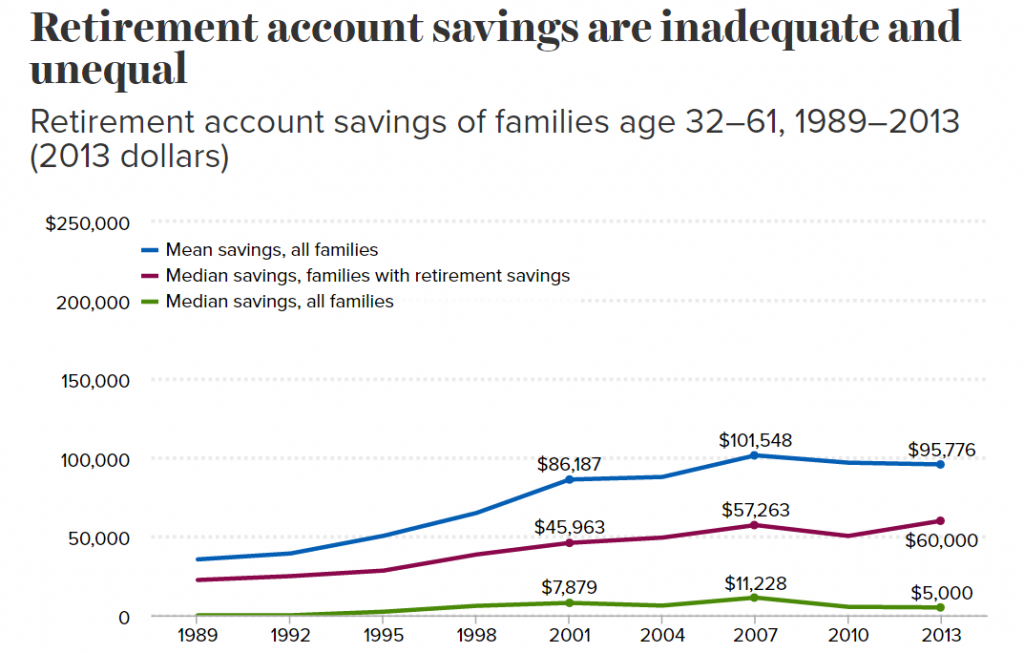 This study offers more granularity. Rather than displaying the mean or median, it displays the distribution of the amount saved by age group.  For example, the table below shows that of those age 35-44, 37% have saved less than $1,000, and 15% have saved $250,000 or more.

Do Underestimates of Retirement Needs Lead to Low Retirement Savings?

A possible explanation for anemic average retirement savings by age could be the amount savers believe they will need in retirement.  The same EBRI study illustrates how much people believe they need.

About half of this surveyed think that less than $500,000 will be sufficient. Let’s compare the difference between expectations and reality.

Let’s use the rule of thumb in financial planning that your retirement nest egg can stand withdrawals of 4% annually, adjusted annually for inflation, and last for life. (Get a more accurate estimate using  our retirement calculator).

We need to also account for potential use of home equity in retirement and other assets not typically included as retirement assets in various surveys.  Might that add another 20% to retirement income for a total around $43,000?  While that seems like a comfortable amount for living on a beach in Mexico, it does not seem adequate for living in the US, especially in a metropolitan area, to say nothing of money for travel.

Is it possible that the anemic retirement savings rate is due to the underestimate of the amount people really need?

Other Factors that Contribute to Low Average Retirement Savings

Here’s another look at the same issue.  Hewitt Associates estimates that the average projected post-retirement income replacement needed among employees of large U.S. employers is 126 percent of final pay, a level only about 19 percent of employees are expected to satisfy. Why 126%?

Because they realistically factor in the impact of inflation and health care costs, two costs for which most retirees have overlooked the magnitude.

If we assume that the average person earns $40,000 annually, he would need about $50,000 in retirement income, requiring an average retirement savings of $833,000 (not taking into account any social security income).

In fact, according to Hewitt, about 67 percent of the more than 1.8 million employees of 72 large U.S. employers tracked, are expected to have accumulated less than 80 percent of their projected needs at age 65.

It’s clear that we will see many more individuals working well into their 70's just to pay their bills and put food on the table. Unless savings rates make a big change, average retirement savings by retirement date will be too low. 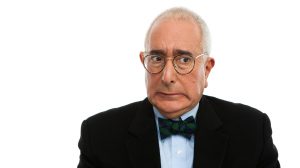 Economist and humorist Ben Stein set out to answer the question, 'Why won't the baby boomers save?' According to Stein, the average baby boomer needs to save about $400,000 to have sufficient interest income to make up the difference between Social Security and what he or she needs for retirement.

Yet the average retirement savings of baby boomers has saved only $50,000—or $110,000 if you include equity in their homes. He calls this paltry figure a crisis in the making.

Humorously exploring the question of how we got to this point, Stein suggested a number of possible causes for low average retirement savings. First, he suggests, baby boomers have 'always had it too good.'

Never having lived through economic hard times, they lack the discipline to save. He also proposes a Freudian explanation: the false sense that mommy and daddy—or the government—will always bail them out if they get in trouble. A third possibility draws on the theories of behavioral psychologist B.F. Skinner: saving offers no immediate gratification, while spending provides immediate positive reinforcement such as a flat-panel plasma TV set or a new car. The final theory suggests that baby boomers feel compelled 'to obey the media consumer spending machine.'

Whatever the cause, Stein concludes, many baby boomers in retirement will have to cut their standard of living drastically, while others will simply run out of money. The baby boomers may actually have saved more than the previous generation of Americans, but because fewer of them have pension plans, they are worse off.  In other words, because baby boomers must save on their own whereas their parents largely had company pension plans, this generation's average retirement savings rate is lower.

No matter who you listen to and what statistics are used, the savings of baby boomers isn't adequate.

The Transamerica Retirement Survey reports these observations from their survey of 4000+ workers: Baby Boomer workers (81 percent) are most likely to be saving for retirement through their employer’s plan and/or outside of work, followed by Generation X (77 percent) and Millennials (68 percent). This is as expected.  As boomers are closest to retirement with the fewest years to “D-Day”(and a third are already in retired), we would expect them to be the most active savers.

But unexpectedly, retirement confidence is highest among Millennials (63 percent) and Baby Boomers (61 percent) and notably lower among Generation X workers (54 percent). Millennials are optimistic even though they are burdened by $1 trillion+ of student debt and have a lower standard of living than the other cohorts. They also have a more dismal retirement future:

Against the odds. Millennials maintain their retirement optimism.  They have the most realistic outlook on how much it takes to retire and how long they need to save. Workers across generations believe that they will need to have saved $1 million (median) to feel financially secure when they retire. Millennials (33 percent) are more likely than Generation X (30 percent) or Baby Boomers (27 percent) to believe they will need to have saved $2 million or more. Among those saving for retirement, Millennials started at a younger age (median age 23) compared to Generation X (median age 28) and Baby Boomers (median age 34).

Women Worse off than Men 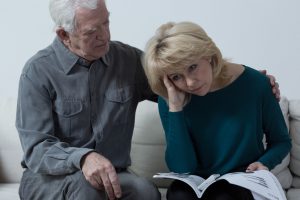 Financial Finesse estimates a 26% lower amounts saved by women than men. And they are 27% more likely than males to have no retirement savings.

It’s somewhat obvious this gender gap would exist as the pay difference is far from closed. If men earn more, they can save more. The 2015 U.S. Census Bureau data that shows women earned $0.79 for every dollar men earned in full-time positions.

Additionally, men don’t have a multi-year absence from the workforce as many women do to raise children.  And the absence occurs early in one’s career. It’s those early dollars that have more years to compound and are worth the most at retirement age.

Additionally, a rising stock market has a positive impact. When one looks at their 401k balance getting larger, it’s an incentive to add more to the retirement pot.

It just makes sense that a strong economy helps people prepare for their future.