Learn how CD-type annuities compensate for the failing that many investors perceive with fixed annuities.

Fixed annuities are popular among retirees and senior citizens. The investment is guaranteed, earnings during the accumulation period are not taxed, and annuity payments during the annuitization phase are partially tax-free and can be guaranteed for life. What's not to like?

But some people are unwilling to invest in a fixed annuity because traditional fixed annuities don't provide any interest guarantee after the first 12 months of the accumulation phase. After the initial period of 12 months, the annuity payments could fluctuate and increase or decrease with every passing calendar year.

Of course, once you annuitize (start taking payments) you will have regular annuity payments for the entire duration of the contract. but we still have the issue of fluctuating rates during the accumulation phase. The solution is CD-type annuities.

CD-type annuities (also called multi-year guarantee annuities) offer a fixed interest rate during the accumulation phase - the years when your principal is growing. CD-type annuities are typically offered in terms for 3 to 10 years. Don't be surprised of agents have not mentioned these as the agent commissions are usually lowest on a CD-type annuity.

I recall that I touted cd-type annuities heavily to my clients in 1995 paying 7%, fixed for 8 years. As interest rates declined year after year, I was a hero to my clients for making this recommendation. Of course, I did not earn as much as other financial advisors who sold less favorable annuities (for the client) but paid a bigger commission.

Pros and Cons of CD-Type Annuities

If interest rates remain as hey are for several years or decline, then you will be happy to have locked in a fixed rate for many years. If however rates increase, then you will be locked into a low rate. You can get your funds out as explained in the "liquidity" section below. No one whether interest rates will rise or fall so many smart investors simply build an annuity ladder.

So instead of investing say, $100,000 into a single annuity, you create your ladder as follows:

You invest $20,000 in five different terms. Then if interest rates rise, the shorter-term annuities will come due and you can reinvest at higher rates. If rates drop, you will have some of your money already locked in at higher rates for several years

The Value of Tax Deferral

In addition to CD-type annuities paying more than bank CDs of a similar term, the interest is taxed deferred. At first you may think,"If it's tax deferred, I need to pay the tax eventually so why bother with the deferral?" You miss the benefit of keeping the tax money and allowing it to compound to give you a larger balance. And income from a larger balance means more income. Let's take a look. 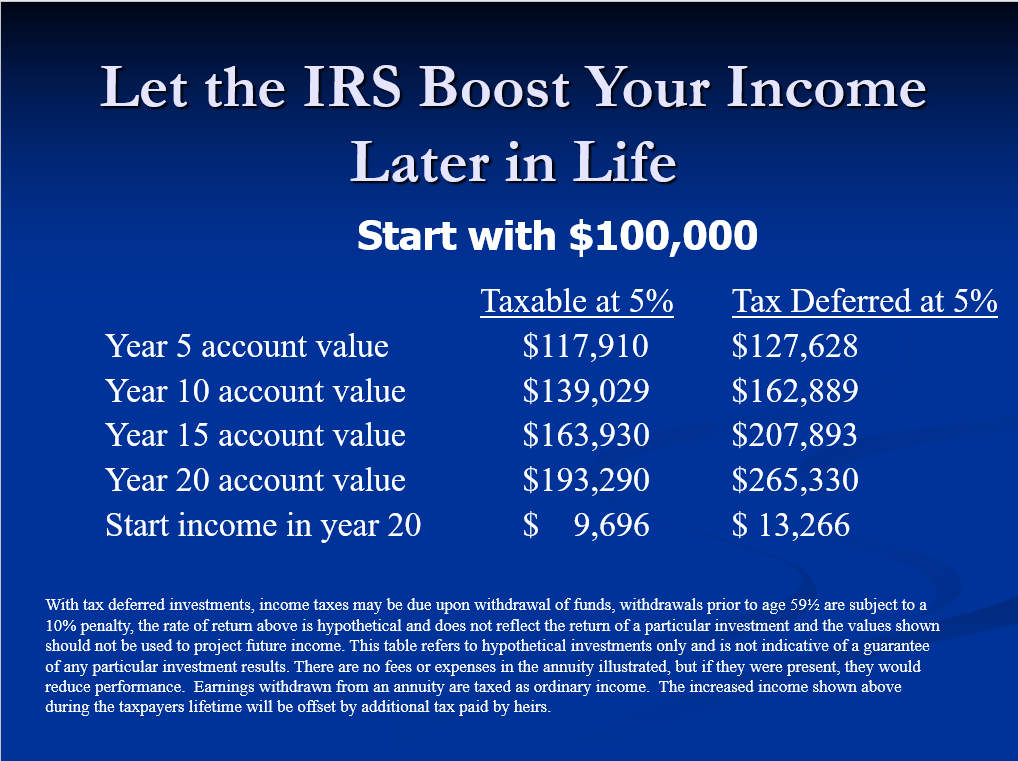 Options for CD-Type Annuities at End of Term

When the annuity term concludes, you will be offered a 30-day period to select your option which is usually:

Like all other conventional annuities, the earnings usually are not subject to income tax while the earnings remain in the account. Additionally, if you move your funds to another annuity company, such transfer when done correctly, is a non-taxable event. Therefore, before deciding to take annuity payments or any other options when your CD-type annuity matures, use the time to shop around and make the choice which best fits your needs.

The insurance industry began calling these multi-year guarantee annuities "CD type" annuities as they have a fixed rate for the entire term just as bank certificates of deposit (CDs). Of course, money in banks, up to certain limits, have a federal guarantee. That guarantee does not extend to annuities. Does that mean you take a risk?

There is not much risk in fixed annuities.  Your risk is that the insurance company will not be able to pay interest or return your principal. To guard against that, only buy annuities from insurance companies with at least an A rating from Standard and Poor's.

However, even annuities from companies with less than an A rating have not faced much risk. The risk of an insurance company failing is mitigated by the State guaranty funds that exist to bail out failed insurance companies. How the State guaranty funds operate differ from state to state. Some are well-funded, others are not. Some only offer a guarantee up to $100,000 of funds.

But another safety net has come to for in recent years.  In the few insurance company failures that occurred in the 1980s, the state department of insurance had the stronger insurance companies take over these failing companies. In that case, the annuity holders did not lose any money.  However, their annuity terms were extended and the investors had less liquidity than under their original contracts.

As a practical matter, my advice stands to invest with insurance companies rated A or better and sleep soundly at night.

What if you need your money before the end of the term?  When you buy an annuity, you will get a contract which you have 30 days to review. Check the provision in the contract about withdrawals. Some CD type annuities do not allow any withdrawals without payment of a surrender fee. Others allow you to take your interest annually and others allow you to take up to 15% of your balance annually. Each company has different provisions.

It's best that you only invest money that you know for certain you will not need during the term. Use your other funds for liquidity.

You want to avoid surrender fees as they are expensive, They are the same as the early withdrawal penalty charged by banks. Here is a sample surrender fee schedule for a 10-year CD-type annuity:

And that is why you only invest in a fixed annuity for a term that is comfortable for you and you make sure you have liquidity from other sources should you need it.

Who Should Buy CD Type Annuities?

Because of these conservative features, CD type annuities are typically used as a tool to create a retirement nest egg or as a savings option during retirement for money that is not currently needed.

Younger people are typically not attracted to such conservative investments. Should they purchase a CD-type annuity, there are federal penalties for withdrawal before age 591/2.  The penalty is 10% of the amount withdrawn. There are two ways to avoid this penalty: 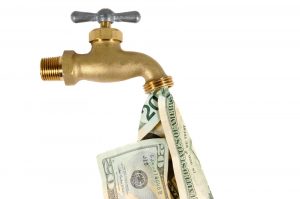 Most Annuity Owners Make This Mistake